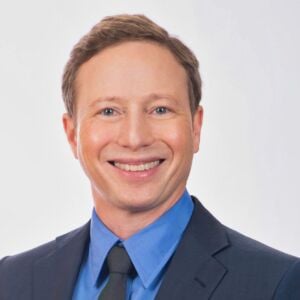 Jeff Kleeman graduated from Yale University with a B.A. in English. He curated exhibits at the Academy of Motion Picture Arts & Sciences and in 1987 joined Paramount Pictures where he was a development and production executive on “Internal Affairs,” “The Hunt for Red October,” “Shirley Valentine” and “Star Trek 6.” He is a writer on the Guy Ritchie-directed “The Man From U.N.C.L.E.” feature, released in 2015. In August 2012, Kleeman became President of Ellen DeGeneres’s company, A Very Good Production. He is Executive Producer on “Little Big Shots,” “Ellen’s Game of Games,” “Splitting Up Together,” and many more.

He is currently in production on “Wildlife Warriors” for Discovery.

Kleeman has been a member of the USC Cinema School faculty, where he taught graduate courses on film development, production and the studio system. He has lectured at Yale, UCLA and Northwestern, and at several film conferences as well as taught Film Independent’s Screenwriter’s Lab.

He has served on the board of directors of The Sundance Channel, IFP West and The Los Angeles Film Festival Advisory Committee, and served as a judge for the International Thriller Writers Best Screenplay Award. He has chaired Film Independent’s Spirit Awards Nominating Committee and currently serves on The Academy of Motion Picture Arts and Sciences Screening Committee.