Support in Early Years is Crucial 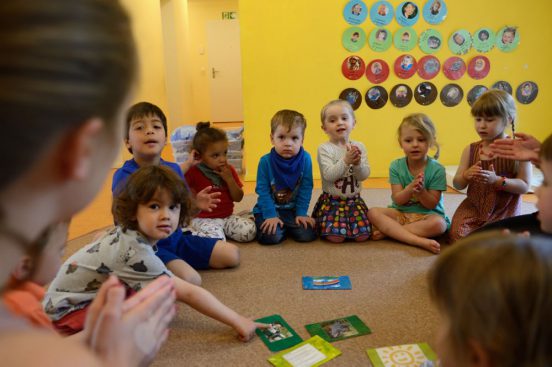 This was the motto of the Primokiz program’s final conference, which was held in June at the Kongresshaus in Zurich. At the invitation of the Jacobs Foundation, approximately 100 representatives of the education, social affairs, healthcare and policy sectors came together to look back on the success of Primokiz and launch its successor: Primokiz2. Over the past three years, the Foundation has helped 18 cities and three cantons create concepts for addressing the issues of early childhood.

There is an old German saying that if you don’t learn something when you’re young, you never will – an observation that remains relevant today. Research has shown that the groundwork for the development of cognitive and social skills is laid in early childhood. When children grow up in a stimulating environment and have the opportunity to learn through play, they are able to realize their potential and prepare for a lifetime of learning. Early childhood programs are one way to create such an environment. Children who lack a stimulating environment will struggle throughout school and into adulthood, since it is almost impossible to make up for the developmental deficits they suffer.

A successful program creates a system built on structures
For many years, the Jacobs Foundation has been working to promote high-quality early childhood education and care (ECEC), recognizing that all children should have the opportunity to develop to their full potential. The Primokiz program is part of that effort. Primokiz has been in operation for over three years, and the Jacobs Foundation has provided funding of some 2.2 million Swiss francs. The program’s goal is to formulate a comprehensive early-childhood policy that includes the education, social affairs and healthcare sectors and encourages them to work together strategically to create a system built on structures. Throughout Switzerland, 18 communities and three cantons have successfully participated in the Primokiz program. Its goal was to help small and medium-sized cities develop and implement early childhood programs and to involve representatives of the healthcare, social affairs and education sectors in the process.

Resources and political support are the key to success
The final conference of the Primokiz program, which was held in June, was an opportunity to discuss the experiences and insights of the past three years. What proved to be particularly important were cooperation among administrative departments, the involvement and networking of all relevant players and providers, and parent participation. Nearly all of the participating communities and cantons have now gained the approval of policymakers to implement the program. Given the current climate of budget cuts, this is a major achievement. As experience and the independent evaluation have made clear, resources and political support play a crucial role in the program’s success. It is difficult to implement a program like Primokiz without such support and resources. This was a lesson several communities learned when they were unable to complete the project. Such communities were in the minority, however. Most were successful and able to create a comprehensive concept. In doing so, they came to recognize even more clearly how the early childhood sector functions, what kind of concept is needed, where problems may arise, and what solutions are possible and feasible.

New handbook for the future
Because of the program’s striking success, and recognizing that other communities and cantons, too, need a comprehensive approach to early childhood issues, the Jacobs Foundation is collaborating with the Roger Federer Foundation to launch a follow-up program called Primokiz2, investing 750,000 Swiss francs in up to 80 project sites. “Investments in early childhood pay off, not only for children, but also for parents, the state and the economy,” says Sandro Giuliani, managing director of the Jacobs Foundation. Children who grow up in a stimulating environment do better on school tests, attain higher levels of education and, as adults, have better career trajectories, higher earnings and fewer drug problems, and they commit fewer crimes. These investments also make economic sense: Studies have shown that every franc that is spent produces a return on investment of at least two francs. The project sites are aided in their work by the new handbook Primokiz-Prozess zur Politik der frühen Kindheit (The Primokiz Approach to an Early Childhood Policy ), and they benefit from the advice of experienced Primokiz experts. Primokiz2 is overseen and co-sponsored by the Jacobs Foundation and the Roger Federer Foundation, and it is managed and implemented by Radix.