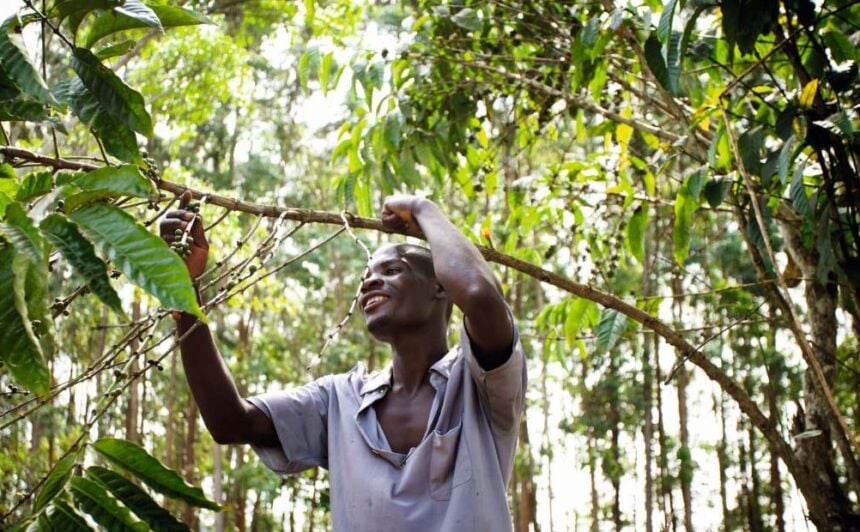 Since 2012, the Jacobs Foundation has been implementing the Youth Development Project in the Mityana district, central Uganda, in cooperation with Hanns R. Neumann Stiftung. As the project has come to an end, we take a look back and give a brief overview to the significant changes the project has contributed to.

Looking back at the outset situation of the Youth Development Project, the communities in four sub counties of the Mityana district had an intact social fabric and were inhabited by a large number of independent small coffee farmers. The coffee farmers’ collective action improved the coffee production (Farmer Field Schools) and created Depot Committees for the bulk marketing of their main product—coffee beans. Although enough land was available, this land was not made available to the youth of Mityana district, due to the mistrust of the community towards their willingness to take up farming and to live a rural life. Men significantly dominated family life, with violence being a common pattern to deal with conflict at home.

To remedy these effects the Youth Development Project focused on optimizing the cultivation methods of smallholder farmers, thereby increasing their income and improving the living conditions of their entire families. Training and raising awareness at community level aimed at encouraging youth to participate in coffee bean production and therefore guiding a new generation of smallholder farmers toward good and productive farming techniques.

The Youth Development Project in Mityana has developed modules and equipped youth with practical skills (agriculture, social, and business). These skills have enabled them to participate in productive agriculture business and have improved their households and livelihood in these rural areas. The project employed a two-track approach. While the Youth Farmer Field School provided hands-on, experiential skills to become self-employed farmers, to all participants, additional vocational training was offered to a smaller group of young people. It was expected that the vocational trainings would spark the creation of additional businesses in the project region, as the trainings were quite popular amongst young people. Upon finalization of the Youth Development Project, it can be seen that many of the graduates from the St. Theresa Vocational Training Institute still rely on agriculture to supplement their income, and agriculture has become a very popular profession among young people.

The secret of the project

Citing Dr. Rudolf Batliner, Program Coordinator at NADEL – Center for Development and Cooperation at ETH Zurich: “It took four visits until I was able to find the secret of this project: It is the package consisting the Youth Farmer Field School (YFFS), Village Saving and Loan Association (VSLA), and Gender Household Approach (GHA). In the YFFS the young farmers learn to make money, in the VSLA they practice how to take care of the money and the GHA helps them to make better use of the money.”

The final outcome of the project is now called “Youth contribute to and benefit from improved rural livelihood.” There has been a substantial increase in home ownership, best seen in the fact that most participants have moved from their parents” houses to their own homes. Land ownership also significantly increased. All participants were able to acquire furniture, electronics, transport vehicles, as well as farm tools, and were also able to significantly increase their land ownership.

All participants of the project have become engaged in agriculture as a business and have established their own farming businesses (maize, beans, tomatoes, and coffee). Many youth have additionally diversified their household income with additional income generating activities, such as poultry and piggery projects, tomato, and bean production. Those of the young people who decided to start growing coffee have already brought in their first harvest and the positive attitudes of youth toward agriculture has significantly increased.

Of the 88 students that graduated from St. Theresa vocational institute, 69 students are now either wage employed or self employed. Courses for bricklaying and tailoring generate higher employment rates than the courses for motorbike repair and carpentry. Still, all graduates also work in agriculture, which makes up a reasonable proportion of their overall income.

At family level, wives and husbands report that the relationships between them have significantly improved. Domestic violence has decreased, and women feel less dependent, and have gained space. They are now also to assume more responsibilities for the wellbeing of their family. More children go to school all year round, because the families can now afford the school fees. Participants also explained why in these 4 years many young people have got married: “Now there is money to look around for a skirt”.

Young people also report that they feel more confident to speak in public or while doing business. Social interaction and support among young people has increased and leads to empowering women and men alike.