A Festive Event for Families – and a New World Record 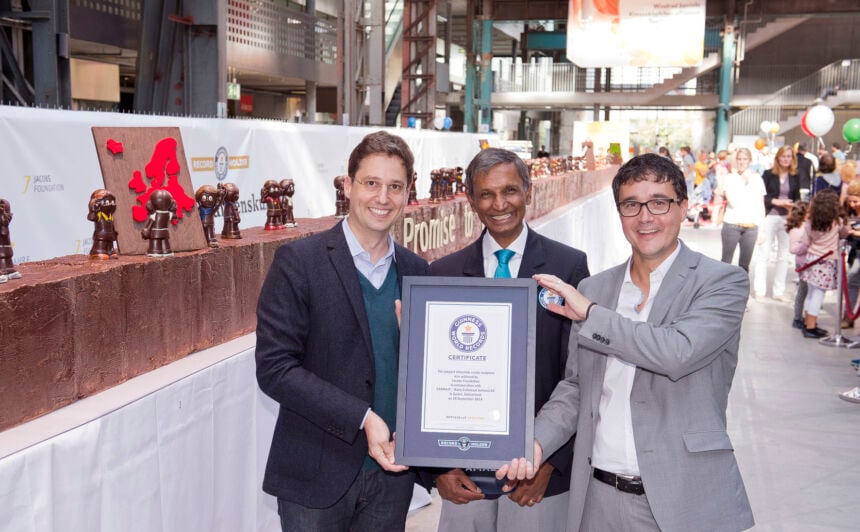 We did it! On September 28, 2014, the Jacobs Foundation and the chocolate manufacturer CARMA were recognized by Guinness Book Records for creating the world’s longest chocolate sculpture.

In the early morning hours, a team of four assistants under the leadership of chocolatier Fabian Sänger had begun their preparations. As the morning wore on, and with more than 3,000 people watching, the sculpture ¬¬– made of the finest gianduja filling and covered with chocolate – grew longer and longer. As planned, the team was almost finished with its work by about noon. Finally it was time to decorate the finished product. Figurines of children, plaques showing all of the world’s continents, and the words “Our Promise to Youth” – all them made of pure chocolate – underscored the mission and motto of the Jacobs Foundation, which is dedicated to helping children and young people all over the world.

Finally, at 2 p.m., it was official: After careful examination, World Records adjudicator Pravin Patel confirmed a new Guinness World Record. The Jacobs Foundation and CARMA had completed the longest chocolate sculpture ever made, measuring 25.24 meters in length. After the record was officially announced, every guest, young and old, was invited to take home a piece of the record-setting chocolate – rather than a slice of birthday cake.

But the world record was only one of the highlights of our 25th anniversary celebration, which focused on children and young people.

Thanks to performances by the children’s cult bands “Tischbombe” and “Schtärneföifi,” a puppet show and Cinella the clown, everyone was in the best of moods. The audience was enthralled by the artistry of beatboxer Camera, who also sang “Happy Birthday” to the Jacobs Foundation. In his workshop, even the youngest children were able to demonstrate their sense of rhythm. Parents, too, took to the microphone to reveal their creative side.

Our heartfelt thanks go to all of the children, teenagers and parents, as well as caregivers and partners, who joined us for this celebration. The delight on the children’s faces, the exciting experiences and encounters, and the good conversations we enjoyed were the most wonderful birthday present we could have received!